Not long ago I had the pleasure of hearing a choral performance of Even When He Is Silent, an anonymous poem set to music by the Norwegian composer Kim André Arnesen. While I can’t provide a video of the performance I heard, fortunately you can hear a lovely rendition conducted by Anton Armstrong by clicking the link to YouTube, located here:

https://www.youtube.com/watch?v=hYwYMngq4II
The words express deep religious conviction, and the musical setting by Arnesen does them justice. The lyric is short and goes as follows: 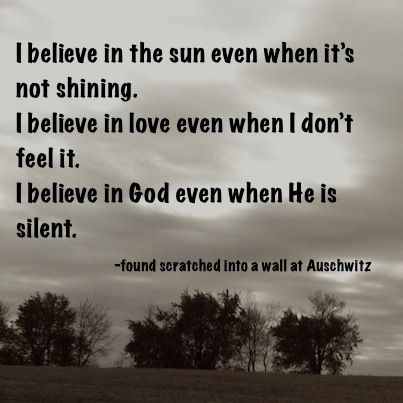 The liner notes identified the poem as originating on a wall at Auschwitz.

While I was deeply moved by the sentiment, the music and the superb performance by a talented group of singers, my historian’s sense was pricked. My period is the ancient world, so it is no surprise that I might not know a composition emanating from the era of the Holocaust, but there is something about this language that strikes me as a little too pat for what I would imagine a concentration inmate inscribing at Hell’s portal. I thought to myself, I wonder what the original language of this poem might say? I expected to find that original language to be Yiddish or German, perhaps even French. I was quite certain it wouldn’t be English.

Of course I turned to Google–where else does one go at first these days for such things? I expected to find some recent quotations and a link to some article or book where the original text would be cited. Much to my astonishment, there was no such link! I spent hours looking at everything Google retrieved for me, but all I could find were articles that quoted the poem in English. I did find one version of it in French, but that was clearly a translation of the English, not a claim to have the original language.

One issue was quickly resolved. Whatever the provenance of this quote may be, it has nothing to do with Auschwitz. There is a reason why many people associate it with Auschwitz, though. In January 2015 a public ceremony was held at Auschwitz and Prince Charles of Wales read the poem there. An example of how the poem is described that day from the (England) Telegraph [“Survivors remember Auschwitz: ‘Every time I come here I feel fearful'”, 1/27/15]:

The Prince finished his short speech by reading out a three-line anonymous poem scratched on to a wall by a victim of the Holocaust.

Notice that the journalists make no claim the poem was discovered at Auschwitz itself. It’s just “a wall”. But they do go so far as to state it was written by a victim of the Holocaust. There is no indication of why they believe that to be the case.

Another surprising result of my search was that Google could not find a single example of this quote earlier than 2005. If the quote was discovered in some connection to the Holocaust, written by someone in a camp which was discovered at the end of the war, how likely is it that the first time it is cited is 40 years later?

If you run your own search you should find what I found. One set of articles that attribute the quote to a discovery in the German city of Cologne. Another set that seems to contradict the first. But none of these articles or links is earlier than 2005 (that I have found so far), none quote the poem in it’s original language, and none provide any evidence that the poem had some connection to the Holocaust or a Jewish author.

My preliminary conclusion is that this story is a false attribution. The poem was written in English and circulated anonymously. Someone thought that it sounded like what might be the words of a person in a bleak place such as a bombed out city or concentration camp. Someone else heard this, loved the poem, and posted it as if it were exactly that.

This sort of phenomenon is not at all unusual. There is a beautiful song composed in Yiddish and made famous by (of all people) Joan Baez called Dona Dona. (On Baez’s recording, the song is named “Donna Donna”.) The first line of the lyric is “Calves are easily bound and slaughtered Never knowing the reason why.” Early in the history of this song, someone believed it to be the work of a Concentration Camp inmate or survivor, and there are not a few references to it that way. In fact, it was written by two American Jewish artists, Shalom Secunda and Aaron Zeitlin, and it had nothing to do with the Holocaust. It was written for a play that began its run in the New York Yiddish theater in 1940.

Another similar error occurred in 1967. The Israeli artist Naomi Shemer composed a beautiful song about Jerusalem, Jerusalem of Gold. After the Six Day War, it became an anthem for those who were delirious over the reunification of the city. Large numbers of people are convinced that Shemer composed the song out of nationalistic pride at this event. But the truth is that she wrote it several months before the start of the war, so it is not possible that she composed it as some sort of victory chant.

I am mindful of one of the important principles of my profession: “The absence of evidence is not evidence of absence.” In other words, if I simply rely on my statement of the absence of a citation, that evidence can be disproved simply by discovering an earlier quote. The closer in time to the end of WW2, the more likely it becomes that the quote has authenticity. And so rather than state my conclusions as some sort of absolute, I would rather post it as a query. Has anyone found this quote cited, described, perhaps even photographed in situ at a time closer to when it is alleged to have been composed?

13 thoughts on “Even When He Is Silent”

This site uses Akismet to reduce spam. Learn how your comment data is processed.